The all-new BMW M2 provides signature M performance in a highly concentrated form. Powered by a 338 kW/460 hp inline six-cylinder engine, an optional six-speed manual gearbox, and rear-wheel drive, the second generation of the compact high-performance sports car promises an unmatched driving experience. Another highlight event in BMW M GmbH’s model offensive is the debut of the new BMW M2, making the first step into the world of high-performance cars even more enticing. 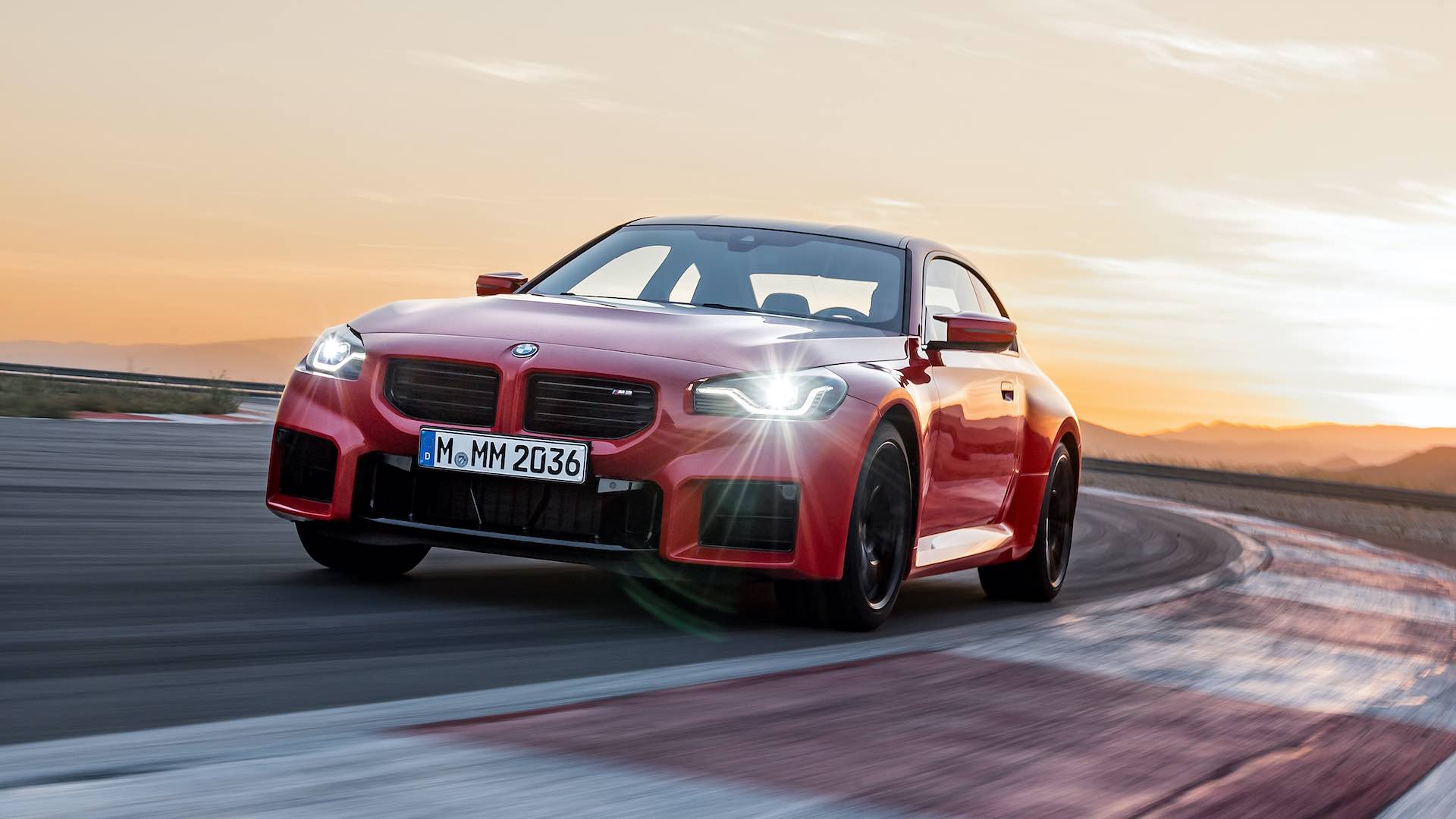 Adapting BMW M3/BMW M4 powertrain and chassis technology is at the heart of a vehicle concept that gives the two-door model beguiling agility and handling that remain easily controlled even as the driver explores its limits. An expressive exterior design with athletic coupe proportions reflects this distinctive character profile. This sophisticated control/operating concept also produces an intense performance experience. Thanks to these many attributes, the new BMW M2 continues the brand’s tradition of ultra-sporty models with compact dimensions that began in 1973 with the arrival of the BMW 2002 turbo. It is also building on the success of its predecessor, which notched up nearly 60,000 sales worldwide.

The new BMW M2 will launch globally in April 2023. It will be built at BMW Group’s Mexico plant alongside the new 2 Series Coupe. BMW M2’s athletic appearance is a result of its compact dimensions, powerful proportions, and hallmark M design features. With a 110-millimeter shorter wheelbase, it measures 214 millimeters shorter than BMW M4 Coupe models. Meanwhile, the widths of the vehicle and track exceed the BMW 2 Series Coupe figures by a considerable margin.

Its large frameless kidney grille, horizontal bars, and almost rectangular lower air intake give the car its familiar M look. Aerodynamic balance and cooling air supply have been taken into consideration in the design. Clearly designed surfaces, prominently flared side skirts and muscular wheel arches set the tone for the side view. The rear end of the new BMW M2 also has a compact, powerful feel and adds a number of individual touches in the form of the eye-catching spoiler lip on the boot lid, the vertically arranged reflectors, the rear apron’s diffuser insert – with its puristic design – and the two pairs of exhaust tailpipes positioned a long way in from the outer edges.

New BMW M2 models come in five exterior paint finishes, including Zandvoort Blue solid and Toronto Red metallic. As an option, the M Carbon roof reduces vehicle weight by around six kilograms. The M TwinPower Turbo technology and high-revving design of the straight-six engine developed for the compact high-performance model stand out with M-typical performance characteristics. With its urgent response, healthy appetite for revs, and linear power delivery into the upper reaches of the engine speed range, the 3.0-liter unit differs from the engines employed in the BMW M3 and BMW M4 models only in a few details.

The new BMW M2’s engine produces 338 kW/460 hp, which is 66 kW/90 hp more than its predecessor’s base unit. At 6,250 rpm, maximum torque of 550 Nm (405 lb-ft) is produced between 2,650 and 5,870 rpm. A maximum of 7,200 rpm is possible. Electrically controlled flaps on the M-specific exhaust system provide an emotionally rich soundtrack for the pulsating power build-up. As with the cooling system, the oil supply system is designed to handle extremely dynamic driving situations.

With Drivelogic as standard, an eight-speed M Steptronic transmission transmits engine power to the rear wheels. This vehicle’s sporty gear shifts, direct engine connection, and ability to execute multiple downshifts to the lowest gear make it ideal for instant acceleration. On the steering wheel are shift paddles and a selector lever sporting the latest M design. There are three shift settings available with Drivelogic.

Those seeking a performance experience in the classical mould, rooted in the intense interaction between driver and vehicle, can opt for a six-speed manual transmission. In addition to its precisely defined shift action, the Gear Shift Assistant ensures slip-free downshifting under braking into corners with engagement speed control. M Setup lets you deactivate the Gear Shift Assistant if needed.

Regardless of transmission choice, the rear-wheel drive of the new BMW M2 also delivers dynamic performance. Drivers can steer the car through corners with controlled drifts due to the linear build-up of lateral acceleration forces. It also allows the driver to carefully probe the vehicle’s performance limits by setting individual intervention thresholds for wheel slip limitation, with ten levels to choose from.

Its Active M Differential at the rear axle is another factor contributing to the BMW M2’s sublime dynamics. Furthermore, it is capable of seamlessly generating a locking effect of up to 100 percent whenever needed. In addition to improving power transfer when accelerating hard out of corners, this optimizes traction on road surfaces by providing different levels of adhesion for the left- and right-hand rear wheels.

In addition to its compact dimensions, short wheelbase, and nearly flawless weight distribution, BMW’s new M2 features sophisticated chassis technology. This enables it to be controlled at the tip of your fingers. In addition to its excellent torsional stiffness, the body structure and chassis mountings are also strengthened by bespoke bracing that contributes to the car’s agility, dynamism, and precision.

A double-joint spring strut front axle and five-link rear axle have M-specific kinematics. In addition to adaptive M suspension with electronic dampers, M Servotronic steering, Dynamic Stability Control (DSC) including Dynamic Mode, and M Compound brakes, the new BMW M2 has six-piston fixed callipers at the front and one floating calliper at the rear. Two pedal feel settings are available for the integrated braking system. New BMW M2 vehicles feature 19-inch light alloy wheels up front and 20-inch wheels at the rear, both representing an inch increase from the 19-inch wheels found on BMW M3s and BMW M4s. They can also be fitted with track tyres.

The new BMW M2 features an advanced BMW Curved Display and a driver-centric cockpit with M-specific readouts, controls and setup options. The 12.3-inch information display presents driving-related information, including Shift Lights. On the 14.9-inch control display, M-specific widgets for vehicle setup and tyre condition can be called up. M-specific readouts are also available on the BMW Head-Up Display.

The BMW Intelligent Personal Assistant and BMW Curved Display are both part of BMW iDrive. Using BMW Operating System 8, it provides intuitive interaction between driver and vehicle through touch control and natural language. The new BMW iDrive system allows for personalization with BMW ID and My BMW App as well as use of a Personal eSIM. Apple CarPlay and Android Auto are also included as standard on the new BMW M2, along with a 5G antenna system.

The driver and front passenger are welcomed by sport seats with Sensatec/Alcantara surfaces as standard. As an alternative, M Sport seats with perforated surfaces in Vernasca leather/Sensatec are available. Carbon fibre-reinforced plastic (CFRP) is used in structural elements of the M Carbon bucket seats, and they feature cutouts in the side bolsters and below the head restraints, which reduces the vehicle’s weight by around 10.8 kilograms.